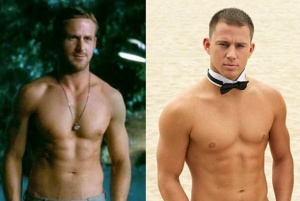 The ‘Gos and ‘Taters’, as Channing is now affectionately known due to his love of starchy food, are about to open a chain of topless male restaurants called Shooters, based on a little known exploitative start-up. They’re looking to expand right around the globe, starting in Melbourne, then Sydney and a string of franchises across North America, with an aim to enter into the Asian and European markets from 2017.

Tatum explains how it call came to be in an exclusive interview with Boredsheet:

“I had wanted to do something with food ever since I realised there’s money to be made from buying and selling goods and services. In Hollywood, you don’t see money that often, most people just give you stuff or it’s taken care of for you. I was googling myself one day and Ryan’s name came up in like some top 5 hottest list and I thought, ‘BAM, that’s a guy I can make money with’ and we kinda knew each other anyway from being with so many of the same girls.’

Tatum said that Gosling jumped at the chance and loved the idea. Interestingly enough, Gosling has had a lot of experience with food service, he washed dishes once at an unknown restaurant. 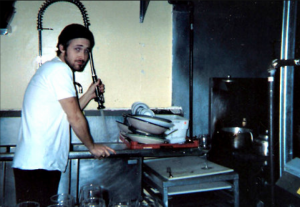 ‘We’re opening our first restaurant in Melbourne in January 2016, it’s pretty much ready to go. We’re using the old Sizzler restaurants premises out at Dandenong initially, we were told this sort of restaurant will appeal what you call the bogan market? Is that right? Then we’ll open another one up nearer to the city.’

The ‘sort of restaurant’ Tatum is referring to is what has tongues wagging. The restaurant will feature semi-nude male waiting staff in the front AND back of house, with rumours swirling that Gosling and Tatum themselves will occasionally be working in the restaurant. The move is stirring up controversy with councils complaining that food safety standards are being breached in the food preparation areas and members of the Men’s Rights Activists (MRA) saying that having topless male waiters ‘objectifies and demeans men’.

‘Yeah we know about the protests.’ Channing continues glumly, ‘The thing that these MRA dudes don’t realise is that if they got onboard, hit the gym and came and worked with us, they could be rolling in pussy … they’re only protesting because they’re all too ugly to get laid and now they hate women.’

Regardless of the controversy, plenty of people are pretty excited about Shooters. Gosling and Tatum both announced the move via their Twitter accounts and have both been re-tweeted over one hundred times each with Facebook also lighting up with comments.

The restaurant is set to open in January 2016 in Dandenong, with both actors in attendance and waiting tables along with other staff. Get in quick if you want to book a table, more information is available on their website: www.shooters.com