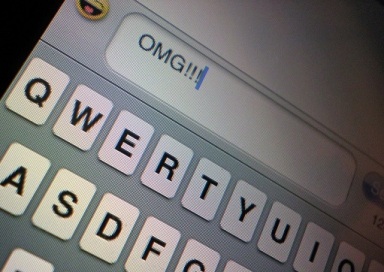 Fiction enthusiasts, the Catholic Church have today launched a class-action lawsuit against tech giant enthusiasts, Apple, over what it deems as ‘blasphemic acronyms and phrases’ allowable in their smartphone’s text messaging technology.

Phrases like ‘OMG’, which experts have revealed actually means Oh My God, and the use of popular terms such as ‘Jesus Fucking Christ’ are considered offensive to Christians, and generally regarded as blasphemy. Famous examples of blasphemy include Simone Callahan calling ex-husband, Shane Warne (God of Spin) a ‘womanising piece of shit’ or more recently, Thomas Aikenhead who was hung for blasphemy at aged 20, in Scotland. He was prosecuted for denying the veracity of the Old Testament and the legitimacy of Christ’s miracles. Classic Thommo!

Apple spokesman, Jonathan McIntosh, said that the church was behind the times on the issue:

“We’ve been in touch with representatives from the church to explain that these phrases no longer have the connotations they think they do, but they’re still pursuing the lawsuit. They’ve submitted an entire list, it’s completely unreasonable. They think ‘LOL’ means ‘Loins of Lust’ for God’s sake… wait… did I just blaspheme? …. please don’t print that.”

With Apple already under fire from the US Government over the FBI phone hacking scandal, it seems an attack from God himself isn’t enough to break their stride.

The church has yet to respond to several fax enquiries for comment, but Apple don’t seem concerned and said they were already working on some hilarious emoji’s which feature characters from the Bible in awkward everyday situations.